Request a Quote
Previous Next 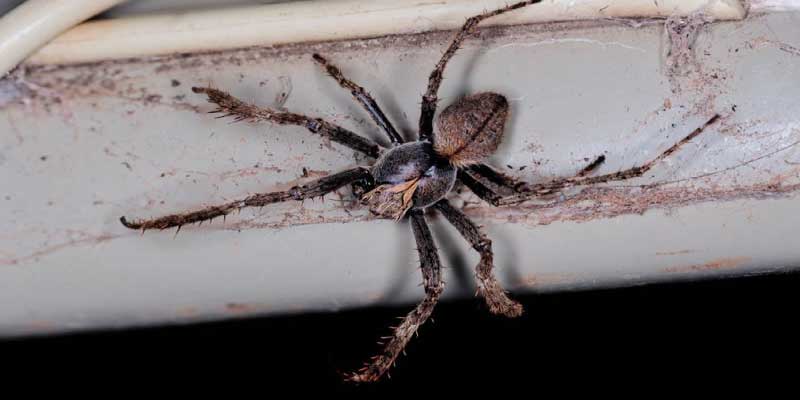 Australia has more venomous creatures per square kilometer than any other continent, and Australian spiders are no exception. Australia’s arachnids pack a formidable arsenal of venom.

Fortunately, since the development of antivenoms in the 1980s, there have been no documented deaths from a spider bite in Australia.

At the same time, though, spiders’ potent venom can cause profound pain and illness. Here are the top ten most dangerous Australian spiders  to look out for. 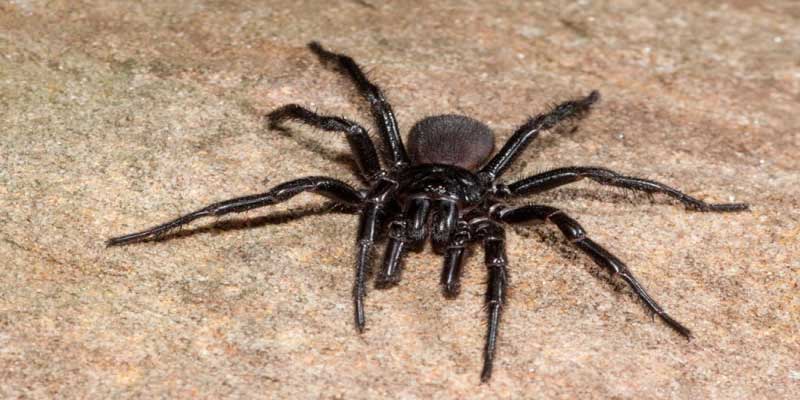 This Australian spider lives in woods, gardens, and bushlands. It prefers to be on the ground, under logs and rocks, and in moist earth.

The body is one to five centimeters, with legs six to seven centimeters. It is glossy and dark, with colours ranging from plum and brown to blue and black. They have very large fangs and a pair of spinnerets.

The Sydney Funnel-Web Spider builds tube-like burrows, lined with silk, with funnel openings. Trip-lines of silk radiate out from the burrow, alerting the spider if prey walks by. The males wander from their burrows in warmer months. Sydney funnel-webs are nocturnal.

The combination of its powerful fangs and potent venom make the Sydney funnel-web one of the most dangerous spiders on the planet. Its venom contains a compound that attacks the nervous system and internal organs. When they bite, they often hang on to their victim and bite multiple times. 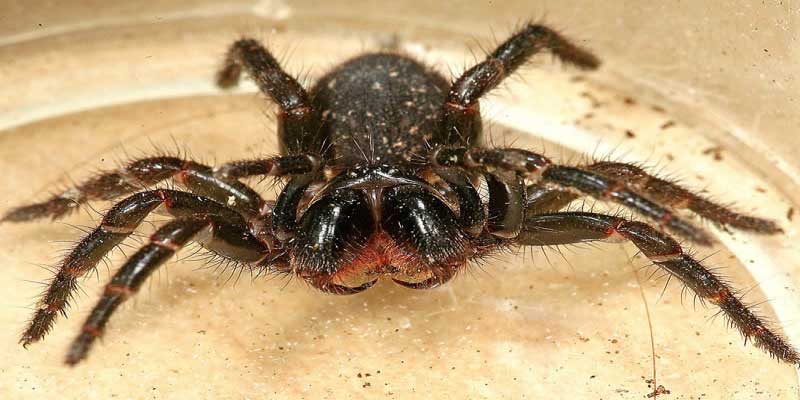 Both of these spiders live in trees, particularly in rotting trunks and branches.

Both are squat and stout, with a glossy body, black carapace, and brown abdomen.

Mostly active at night and after rain, particularly between October and February, the tree funnel-spider will rear up and display drops of venom to threaten adversaries.

The venom from these funnel-web spiders is highly toxic. Within 20 minutes of a bite, the victim may experience profuse sweating, elevated blood pressure, and nausea, as well as build-up of fluid in the lungs. 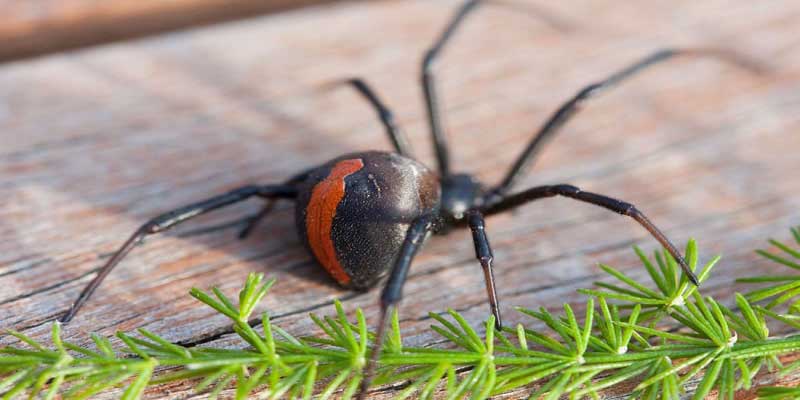 Redback Spiders frequently live in urban and settled areas. They build their webs in sheltered areas that are dry and dark, including inside logs, sheds, and letterboxes.

When it captures prey, it immobilises it with a spray of sticky silk. It is mainly active at night and tends to be less active in cooler weather, though they can survive temperatures below freezing.

After hatching, the juveniles distribute by using fine silk kites to catch the wind and be carried off.

Because of their tendency to cohabitate around humans, redbacks are particular danger. Bites from males produce mild pain, but bites from females—who often strike to protect their webs—can result in nerve damage and nausea. 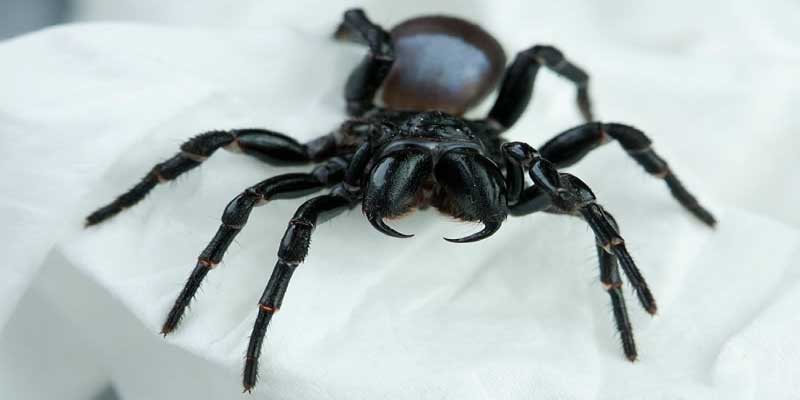 Typically, mouse spiders like to burrow into moist soil, particularly near rivers, ponds, or lakes.

There are eight species of mouse spider, ranging in size from one to three centimeters. They usually have glossy bodies with broad heads and short spinnerets.

The most easily identifiable is the red-headed mouse spider, which can be identified by its brilliant red head and jaws.

Mouse spiders are reclusive and rarely aggressive. While the females usually remain in their burrows, the males will come out during the day in the late summer to early fall in order to hunt.

While their venom is related to that of the funnel-spider, mouse spiders’ bites are less toxic and never fatal, though they can cause illness and fatigue. 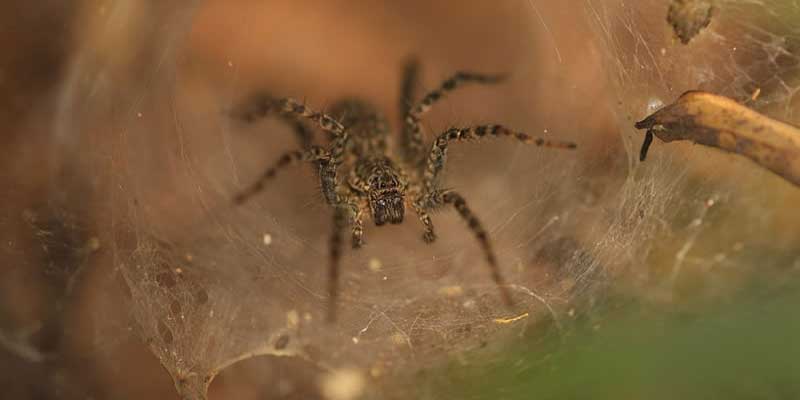 The different members of the trap-door family of spiders live in a wide range of both urban and natural habitats.

The different members of this Australian spider family have differing appearances, but generally they are squat, round, and glossy, with fine hairs and a brown colour. In some species, the males have spurs on their legs, and some have red tips to their legs.

Many (but not all) of these spiders are named for their practice of excavating corkscrew-like burrows underground, which they cap with a lid hinged by silk and made of soil, dirt, or litter.

The venom from a trapdoor spider’s bite can cause localised pain and swelling, and sometimes lethargy and nausea. 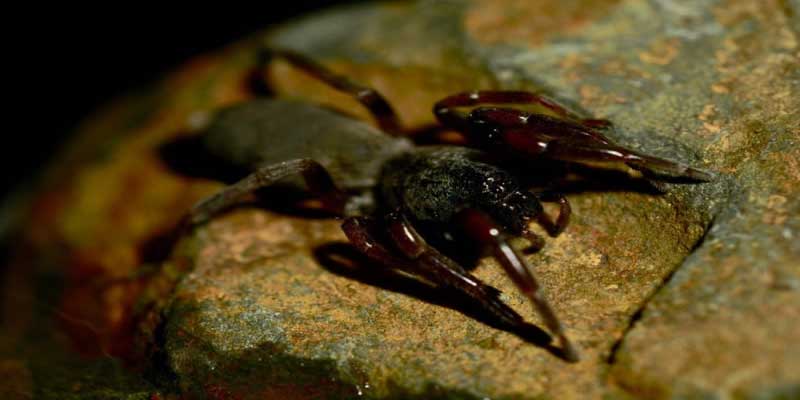 These ground-dwelling spiders can be found in any urban or natural habitat.

The white-tailed spider is slender, with a long dark body and light brown legs. Its most distinguishing trait is the white patch of color on the tip of its abdomen.

White-tailed spiders are nocturnal hunters who are particularly drawn to areas where they can eat other spiders.

While there is a popular myth that white-tailed spiders have a necrotising venom that eats flesh, the truth is that their venom only causes slight, localised pain. 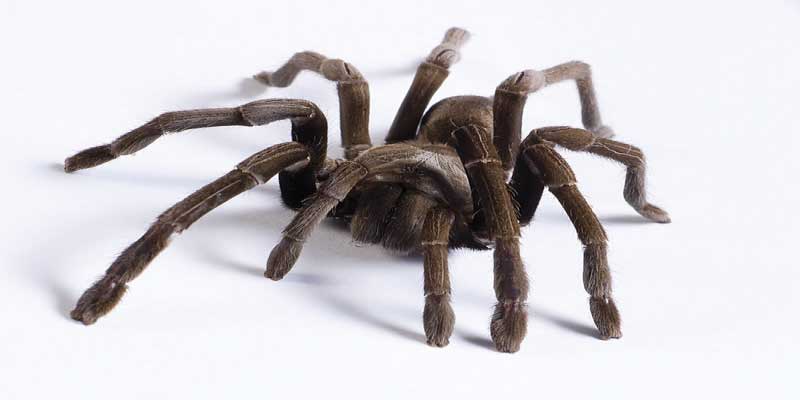 Tarantulas live in web-lined burrows or silk-web shelters built under logs or rocks.

Most tarantulas measure about six centimeters in length, with a leg span around 16 centimeters and large fangs. Their colour varies from dark brown to pale brown and they usually have a silvery sheen from their coat of hairs.

Tarantulas are not typically aggressive and will usually rear on their hind legs to intimidate threats before they bite. Several of the Australian species can produce sound by rubbing their front legs against their jaws, resulting in their nicknames, “whistling” or “barking” spiders.

Most of the pain from a tarantula bite comes from the tremendous size of their fangs, which can be up to one centimeter in length.

Their venom can also result in fever, nausea, and vomiting. Dogs are particularly susceptible to their venom, however, and can die from a single bite. 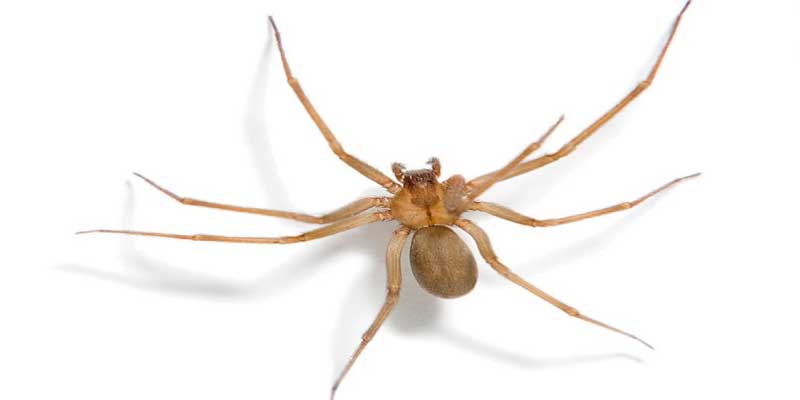 Found in both natural and urban areas around Adelaide, recluse spiders are primarily ground-dwelling. They can also be found inside enclosed spaces, such as logs and woodpiles, sheds, and postboxes.

These thin spiders have long legs and range in color from light to dark brown. They can be identified by a violin-shaped white marking on their back (hence their nickname, “fiddleback” spiders).

Recluses are hunter spiders and often lie in wait for their prey while concealed under or behind something. They are not typically aggressive unless provoked.

The venom of the brown recluse can cause necrotic skin lesions that can be slow to heal. If their venom enters the bloodstream, it can also sometimes cause red blood cell destruction, but their short fangs also make this particular scenario rare. 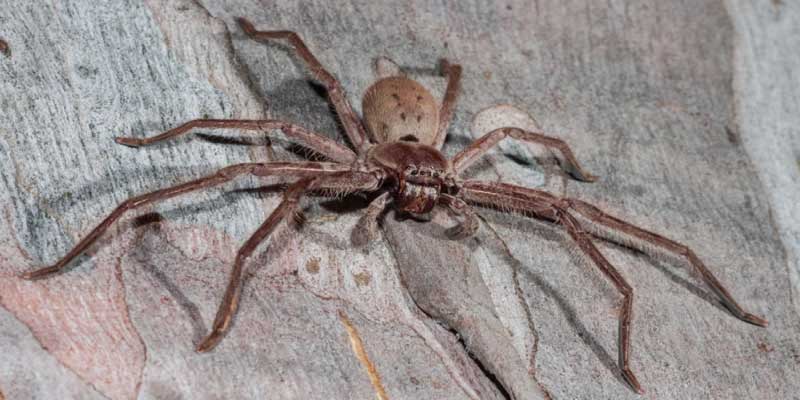 Most species of huntsman spiders like to remain concealed in dark places. They can be found in urban and natural areas and are especially drawn to warm and moist locations.

Huntsman spiders are very large—up to 15 centimeters—and very hairy. They come in a range of colouring but are often identifiable by their patterns of stripes and symmetrical markings.

These reclusive Australian spiders are not aggressive and reluctant to get involved with anything larger than themselves. Huntsman spiders will typically flee before stopping to bite.

While the bite of the huntsman can cause some minor, localised irritation, their venom is not toxic to humans. Their primary danger is in the fear they can cause. 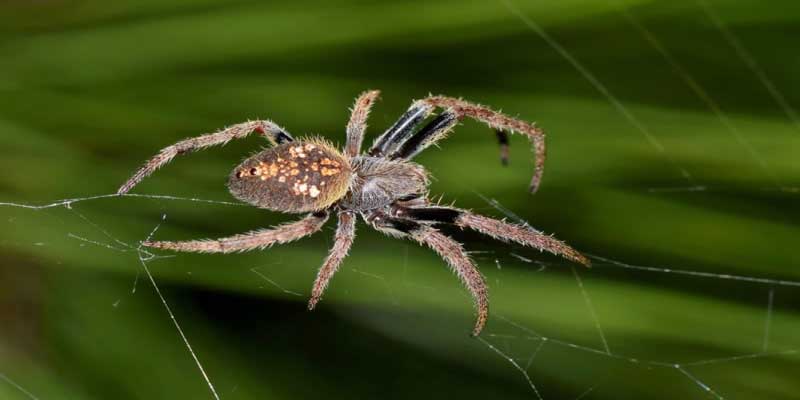 Orb Weavers prefer to live among plants, particularly bushes and trees, and can be found in most gardens.

These Australian spiders come in a range of colours, often with reddish legs, and are typically between 1.5 and 3 centimeters. Most have a rounded abdomen and often have whitish spots or lines.

Named for their complex spiral and wheel-shaped webs, these common spiders typically hang upside down and wait for insects to get stuck in the silk.

They are most active a night. When threatened and unable to bite, they will often drop to the ground and play dead.

Though their fangs are small, the venom of an orb weaver can produce redness and localised pain for several hours. They are aggressive and will bite if provoked. 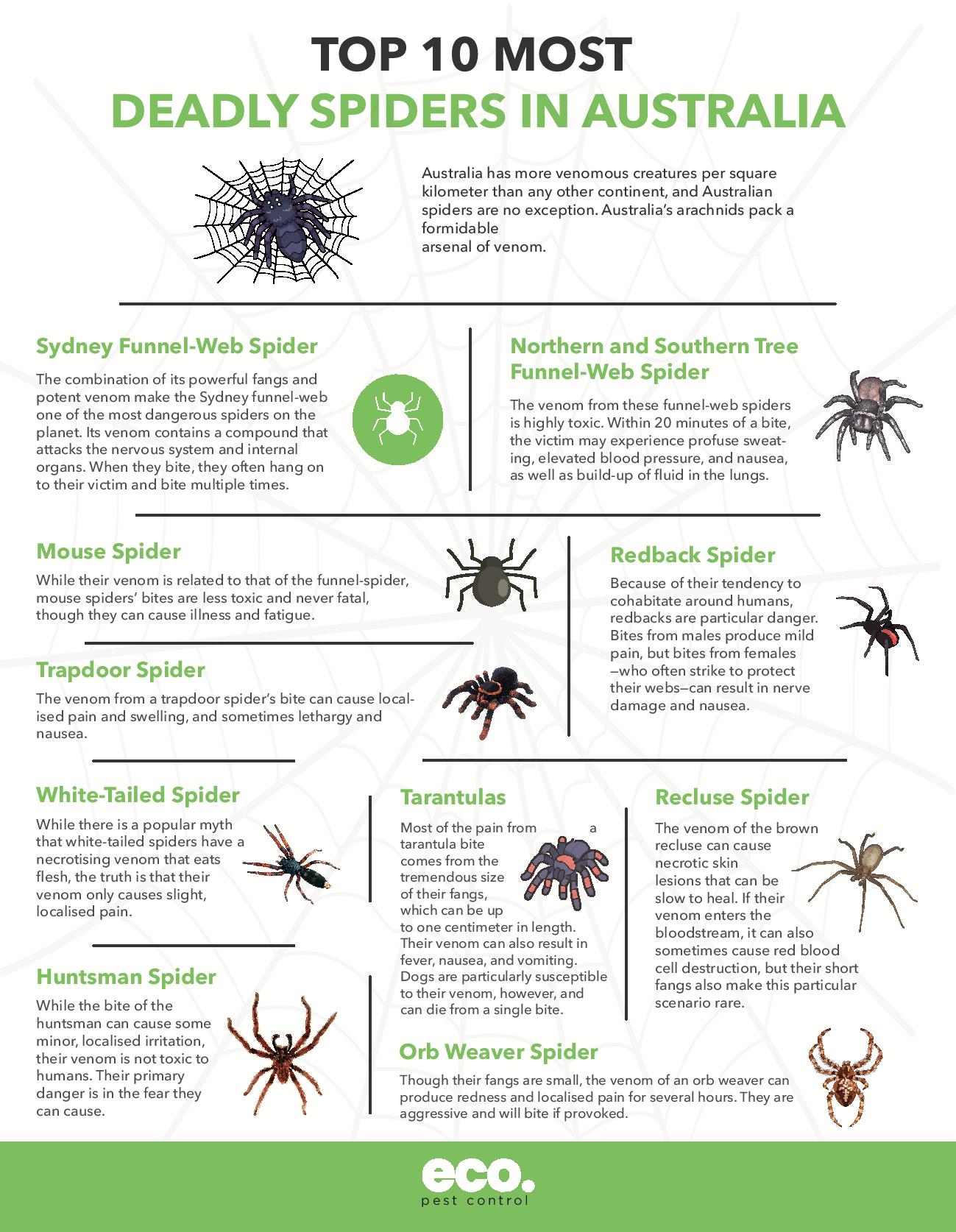 Australian spiders are nothing to mess around with. If you think you or someone you know has been bitten by any of these spiders, it’s important to seek medical assistance immediately.

The sooner an antivenom regimen can be applied, the less of a risk there will be for lasting damage.

The article was published by Edward Ellis from Ecopestcontrolbrisbane.com.au if you have any questions or comments please let us know. Thanks for reading.

By Edward Ellis|May 14th, 2020|Pest Control|Comments Off on Top 10 Most Deadly Spiders in Australia – INFOGRAPHIC

About the Author: Edward Ellis